Think Global: The Catalan push for independence from Spain – tragedy and/or farce?

The political crisis in Spain over the push for the independence of Catalonia has become as a high stakes game of ‘chicken’ –one where whoever takes a back or side step becomes the loser.

On the one hand, this has increased political and social tensions dramatically, with profound and deepening implications for the future of Catalonia and Spain. On the other hand, it has produced plenty of bizarre scenes and political scenarios, some of which risk transforming the internal conflict into a European crisis. This seminar will explain the traction of the current push for independence as the result of the confluence of two separate elements: identity and the economy. In addition, the seminar will explore political corruption, as the third and often hidden element, as well as the most recent and fascinating phenomenon, the emergence of Tabarnia. The seminar will also provide some historical background and offer some reflections on what lies ahead, including some thoughts on how the crisis might impact on the future of the European Union.

Dr Benito Cao is Senior Lecturer in Politics at the University of Adelaide. He has a vast teaching experience in a wide range of areas, including identity politics, security studies, international relations, European politics, and Australian politics. He has received numerous teaching awards and has published in the fields of identity politics, critical thinking, environmental politics and citizenship studies. He is the author of Environment and Citizenship (Routledge 2015).

Think Global is a monthly series of free public talks with a focus on contemporary politics and international relations. The Centre of Democracy has partnered with Flinders University, the University of Adelaide and the University of South Australia to share new research and engage with current  political debate. 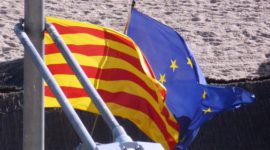