Exhibition – Protests for Peace: Photographs from the Adelaide Moratoriums 1970-1972

An exhibition of photographs by Leo Davis presented by The History Trust of South Australia and the Centre of Democracy from 2 November 2020 to 11 July 2021.

2020 marks the fiftieth anniversary of Australia’s first Moratoriums, which saw thousands of people in cities across the country gather to protest against Australia’s participation in the war in Vietnam and the conscription of the nation’s young men. The massive marches that took place on 8 + 9 May and 18 September 1970, and 30 June 1971 were unprecedented in Australia, as was the campaign of which they were a part.

THE MORATORIUMS
In Adelaide groups such as the Campaign for Peace in Vietnam and the Vietnam Moratorium Committee organized over forty-five events and distributed thousands of leaflets in the lead up to the 9 May rally, a peaceful march attended by well over 5,000 people. The second march, which took place on Friday 18 September, involved occupying the busy intersection of North Terrace and King William Street, and was designed to ‘bring the life of the nation to a standstill’. The clashes that occurred between protestors and the police led Premier Don Dunstan to call for a Royal Commission which resulted in the confirmation of rights of citizens to freedom of expression and peaceful assembly.

WHY IT MATTERS TODAY
Today we take such democratic rights for granted, but looking back at the Moratoriums reminds us that they were not always a given. As a significant example of participatory democracy the Moratoriums clearly demonstrate both the power of individuals to bring about change, and the fact that democracy is strengthened by informed engagement by active citizens. 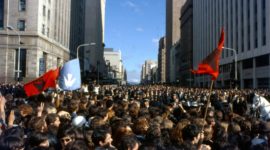