Feminism and Democracy – Then and Now

December 2019 marks the 125th anniversary of the landmark legislation that enabled women in SA to vote in general elections, and to stand as members of Parliament.

Join the Feminist Writers Festival, the Centre of Democracy, Writers SA, Wakefield Press and the State Library of SA to commemorate this achievement and discuss what democracy and feminism mean today, with two panels of inspiring women.

This year, SA celebrates women’s right to vote and stand for parliament: 125 years ago. Clare Wright and Denise George explore how it all happened. Denise tells the story of SA’s world-leading achievement in her biography of leading Adelaide suffragist, Mary Lee, and Clare’s You Daughters of Freedom charts its spread to the rest of Australia, and Australia’s role in the international push.

Panel 2: Who Our Foremothers Forget

In celebrating 125 years of women’s suffrage, let’s not forget that it wasn’t exactly all-inclusive. Whose voices were missing and why? Our panel looks at how much things have improved for those of non-dominant cultures and identities and ask, how do we imagine a future that is truly feminist and equal?

Denise George studied Professional Writing and Communication, and has a PhD in English and Creative Writing from the University of Adelaide. Her book, Mary Lee, is the result of exhaustive searches in Armagh, Monaghan, Cambridge, London and Adelaide.

Dr Nikki Sullivan is Manager, Centre of Democracy. Prior to working for the History Trust of South Australia she spent twenty five years in academia where she taught in Gender and Cultural Studies. She has published widely on issues of gender, sexuality and the body, and is passionate about feminist activism.

Genevieve Theseira-Haese is the former Lady Mayoress of the City of Adelaide. She is the founder of HerStory, a project to recognise and celebrate the lives and achievements of women’s work in South Australia, and founder and owner of BreathingSpace, a healing arts portal promoting the healing arts to corporate executives. Genevieve is active in the community, focusing her efforts in the areas of multicultural engagement, mental health and women’s advocacy, and she is patron to a number of SA organisations, including The Magdalene Centre, Amicus, Minimisation of Suicide Harm and The Multicultural Communities Council Women’s Migrant Group.

Rosemary Kudnarto Wanganeen is a proud South Australian Aboriginal woman with ancestral links to Kaurna of the Adelaide Plains and Wirringu from the West Coast. She is founder of the Australian Institute for Loss and Grief and as a griefologist has reframed the deficit western construct of ‘Aboriginal disadvantage’ under the umbrella of loss and grief as the missing link to Aboriginal prosperity. Rosemary is undertaking a Master in Philosophy at Adelaide University, and – among other accolades – was a finalist in SA Health’s 2016 Mental Health Excellence Awards.

Tory Shepherd is a senior News Corp columnist and The Advertiser’s state editor. She spent several years in the Canberra Press Gallery and contributes to The Project, The Drum, Sunrise, Today and ABC radio. She is the author of On Freedom.

Dr Clare Wright is Associate Professor of History at La Trobe University, an award-winning historian and author who has worked as an academic, political speechwriter, historical consultant and radio and television broadcaster. Her book, The Forgotten Rebels of Eureka, won the 2014 Stella Prize and the 2014 NIB Award for Literature and was shortlisted for many other awards. Her latest book is You Daughters of Freedom, which has been shortlisted for the 2019 Prime Ministers Literary Awards.

Manal Younus is a freelance storyteller from Eritrea who believes that language and stories are the very fabric of our existence. Using writing and performance, she explores perseverance, identity, travel and truth, touching on issues including female empowerment, faith, blackness, racism and interculturalism. Manal has appeared on QandA, presented at Adelaide TEDx and the Adelaide Festival of Ideas, and facilitates writing, performance, public speaking, youth empowerment and intercultural awareness workshops in schools, community groups and workplaces. 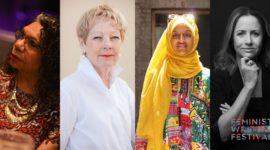