After South Australia gained responsible government, elections for the two houses in the first Parliament were held in March 1857. That Parliament ran for the next three years, during which time there were four premiers. The contributions and experiences of these four men before, during and after their time in the South Australian Parliament tell us a lot about life in the new colony. Part of a broader project on the 46 premiers of South Australia, this presentation will weave together stories about the first four premiers with some glimpses into the factors and forces that shaped our democracy. 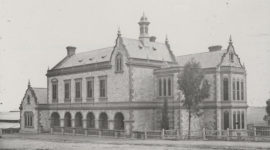