You are invited to celebrate the launch of Yes Yes Yes: Australia’s Journey to Marriage Equality and to reflect on the journey.

The launch will begin with a speech by Senator Penny Wong.

Following this, there will be a moderated panel with Senator Sarah Hanson-Young, Adelaide marriage equality activist Joseph Scales and authors Alex Greenwich and Shirleene Robinson.

A compelling, moving account of the long journey to marriage equality in Australia.

Yes Yes Yes, written by two advocates intimately involved in the struggle for marriage equality, reveals the untold story of how a grassroots movement won hearts and minds and transformed a country. From its tentative origins in 2004, through to a groundswell of public support, everyday people contributed so much to see marriage equality become law.

The book captures the passion that propelled the movement forward, weaving together stories of heartbreak, hope and triumph. It is based on personal memories and more than forty interviews with key figures and everyday advocates from across Australia. It covers the movement’s origins in 2004, when the Marriage Act of 1961 was amended to exclude same-sex couples, through to the unsuccessful High Court challenge, a public vote in 2017 and the Parliamentary aftermath. It reminds us that social change is possible and that love is love. 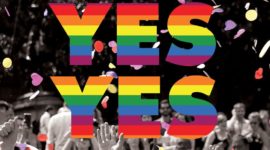