Lizzy Emery is a PhD candidate in the Department of Women’s Studies at Flinders University whose dissertation focuses on feminist craft practice, including craftivism. Lizzie has taught textiles at the UniSA School of Art since 2014 and has facilitated workshops in a variety of areas of textile crafts over the last 10 years. She has skills in embroidery, working with plant dyes, knitting, crochet and more. Lizzie is excited about the Centre of Democracy’s Stitch & Resist project and the capacity of feminist craft practice more generally to provide an avenue for civic participation.

The writer begins her meditation with the words, “as I cannot write I put this down simply and freely.” From the beginning of her passage there is doubt that her own words could even constitute writing, as is apologetically lamented in the words, as I cannot write. These words are in fact written with thread, as if to suggest that the shape of a stitch does not carry the same rhetorical weight as an ink drawn letter. Two red stitched lines cross over to form the shape of an X, repeated in thread one thousand times over. Precise, ordered, no lines to follow, only imagined ruled lines traced by a determined eye, small red x’s that form a life. The writer harnesses her dexterity in the art of cross-stitch embroidery to journal a personal document of her young life; a deeply transgressive act for a nineteenth century woman. X marks the spot, the location of a life.

In 1830 young English woman Elizabeth Parker, aged seventeen, stitched the story of her life using red silk thread on plain white cotton cloth. In the era in which her stitched biography was created Parker’s writing tools, needle and thread, were ideological objects of English femininity. Embroidery in nineteenth century England was socially inscribed as a symbol of the purity of femininity. For women during this historical location stitching with needle and thread was not merely a creative activity, it was a reflection of good feminine behaviour. Even as the teaching of literacy became more widely accessible to both boys and girls in nineteenth century England, needle and thread were diligently used to teach girls how to write. The extent of this social practice is seen in the example of nineteenth century samplers, where young girls demonstrated their competency with needle and thread while simultaneously displaying their literacy skills. Embroidery was equated with femininity to the extent that it was perceived as the natural domain of women to live their lives through the act of stitching.[1] Conversely, ink and paper were inscribed as masculine, tools of the male writer.

Elizabeth Parker’s cross-stitched discourse stands as an anomaly within the time of its creation, providing insight into a young woman’s deeply personal use of cross-stitch embroidery. Parker’s text however is not just an account of a simple nineteenth century life; it stands as a testament to a young woman’s trauma. While Parker does not explicitly reveal the details of her trauma the reader is informed that she came to work for a household where she experienced “cruelty too horrible to mention,” at the hands of a man she refers to as Lieutenant G. “For trying to avoid the wicked design of my master I was thrown down stairs,” she tells us. As readers of Parker’s text, where the writer is restrained in the revelation of details, we can only imagine the true depth of the trauma that this young woman endured. Parker’s turn of phrase “the wicked design of my master” is reserved in its detail, but speaks painful volumes to its meaning.

The use of reserved language to describe her experience of trauma further reveals the shame and stigma produced by acts of sexual abuse. For a young nineteenth century domestic servant to reveal details of such a traumatic experience would have resulted in grave social consequences for Parker. Parker’s writing reveals that she was profoundly aware of this, as her text reveals her descent into depression after the violent incident, which then ultimately leads to her contemplation of suicide, “I arose from my seat to go into the bedroom and as I was going I thought within myself ah me I will retire into the most remotest part of the wood and there execute my design and that design was the wilful design of self destruction.”[2] In stitching her story Parker is able to materialise her experience into a physical form. If she cannot speak her trauma aloud than her stitching will speak for her.

Parker’s incredible account of a life recorded in red thread provokes the question, who was she writing for? Was there a perceived external audience in the writer’s mind or was it purely an act of personal exorcism? Did she dream of her writing one day being discovered, to stand as an historical testimony of her lived experience? Or was the action of stitching her life story, x by x, the only proof she desired? Parker shows the reader that the act of stitching can be used as a conduit to make trauma real, concrete, tactile, visible, and true. Through the materiality of red thread on white cloth Parker transforms trauma into evidence, with her cross-stitch remaining a living document of one woman’s pain. Given the disbelief of so many women’s accounts of sexual violence Parker’s stitched text stands as a remarkable historical testament to the burden of secrecy and shame that is carried deep inside the self. Stitch by stitch, using her writer’s tools of needle and thread, Parker manifests into physicality the residue of pain.

[1] See Rozsika Parker’s seminal text The Subversive Stitch: Embroidery and the Making of the Feminine (1984) for a thorough exploration of women’s historical relationship to needlework.

[2] Despite the sorrow of her early life Parker did not die young. Parker remained living in Ashburnham, East Sussex for the duration of her life, becoming a teacher at the Ashburnham Charity School. Parker died at the age of 76 in 1889. The Victoria and Albert Museum entry on Elizabeth Parker contains more details on her life. 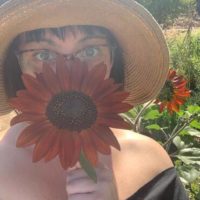