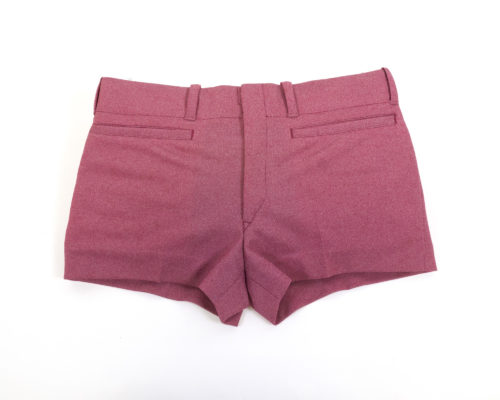 When Premier Dunstan posed, beaming, on the steps of SAs Parliament House on November 22nd 1972 wearing his pink shorts, a white t-shirt and white knee-hi socks, he made headlines. “Dazzling Don Dunstan has done it again”, The News reported: “South Australia’s swinging Premier stood out like a beacon in the grey conservative decor of Parliament House”. [i] 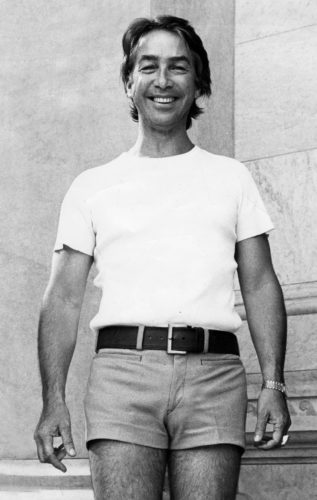 And he certainly did stand out! His distinctive, bright pink and very short shorts are symbolic of Dunstan’s challenge to the political establishment, social conservatism and hegemonic masculinity. [ii] They represent his progressive politics – especially his work in social justice, law reform, and the arts. [iii] The Adelaide queer community have adopted Dunstan’s pink shorts as a symbol of pride, freedom, and diversity in recognition of his role in decriminalising homosexuality in South Australia in 1975.[iv] But before they became a public sensation and an icon, somebody designed and tailored these shorts according to fit Dunstan’s body and style. They are, first and foremost, an intimate material object. But who made these shorts? How does their style reflect Dunstan’s attitudes about dress? What can a close examination of the garment tell us about the men who made and wore them?

Dunstan recalls that when he was pre-selected as a Labor candidate: “Clyde Cameron took us for a drink at the State Parliament House and urged us all to get better clothes and that we needed to go to a particular Italian tailor in the city”. [v] Dunstan took this advice and soon developed a reputation for being “fearless and fastidious about what he wore”. [vi] Throughout his political career, the same tailor made his short shorts, safari suits, and Nehru suits. This tailor was instrumental in creating Dunstan’s image as a flamboyant and progressive figure in conservative Adelaide; however, the tailor’s name is missing from recent biographies and even Dunstan’s memoir. So, who tailored the famous pink shorts?

Close examination of the iconic garment reveal that Dunstan’s shorts are tailored in a polyester double-knit fabric that is, surprisingly, burgundy and white on close inspection, rather than pink. They are constructed by machine and hemmed and finished by hand. However, there are no clues as to identity of the hands that did this careful work. As a tailor and fashion historian, I was determined to credit the craftsperson responsible for this famous garment, and who was so important in realising Dunstan’s dress ethos and daring style. So I turned to the archive for answers. 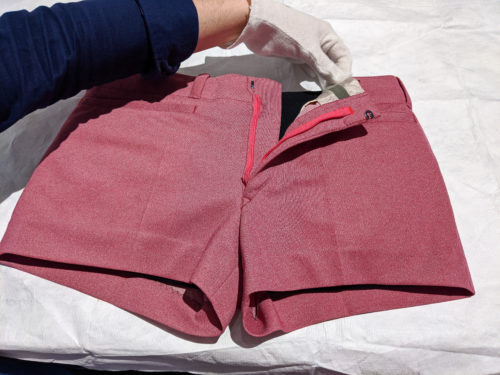 In the Dunstan Collection at Flinders University Library are press clippings collected by and related to Dunstan. Amongst them two obituaries for “Don Dunstan’s tailor”. His name was Joe (Giuseppe) Ielasi. [vii]

Ielasi migrated to Adelaide from Italy in November 1950. The very next day, he began working for his cousin and fellow tailor Joe Mittiga at his Hindley Street premises.[viii] Mittiga ran “Mittiga Tailor World Fashions” at 71 Hindley Street.[ix]

Ielasi is the tailor recommended to Dunstan by Cameron. He tailored Dunstan’s famous safari suits and iconic pink shorts.[x] Ielasi and Dunstan formed a lasting friendship, and their conversations ranged from politics to fashion, topics which, for both men, were closely intertwined. Dress is inherently and necessarily political.

Don Dunstan was known not only as a flamboyant, but as thoughtful in his choice of dress. He said that: “people should have a good sense of design and of colour and texture and material and that their clothes should be comfortable and well designed”.[xi] With his expertise as a tailor, Ielasi realised this vision and made Dunstan’s most iconic and stylish clothes. Ielasi played a significant role in fashioning Dunstan’s public image and, beyond that, in shaping South Australia’s fashion sensibility. 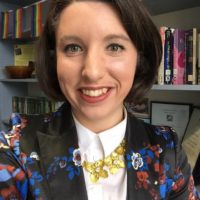 Visiting Research Fellow, Faculty of Arts, The University of Adelaide