Women’s suffrage was raised in seven separate (unsuccessful) Bills in the South Australian Parliament between 1886 and 1894. During this time, public meetings, lectures, letters to the press, deputations and petitions punctuated public life and slowly turned the tide of public and parliamentary opinion. A driving force behind the struggle for suffrage was the Women’s Suffrage League (WSL) – formed in 1888 – whose core principles were:

• That the women of the country should have a voice in the choice of representatives to the House of Legislature.
• That the qualifications entitling women to vote should be the same as those which apply to men.
• That while woman’s suffrage is desired no claim is put forward for the right to sit as representatives.

In 1894 the Adult Suffrage Bill which called for women to be accorded the right to vote on the same basis as men, and which was to become the final Bill calling for women’s suffrage, was read and debated in parliament. A petition in support of the Bill containing 11,600 signatures was presented, as was one opposing it signed by forty-four women. One of the reasons given by the latter was that “the duties and life of men and women are divinely ordered to be different both in the State and in the home”, a belief that was shared by Ebenezer Ward who in his opposition speech during the second reading of the Bill cited the Book of Genesis. In case this were not enough, Ward also attempted to gain support from publicans and the drinking public by proclaiming that “the extension of the franchise [to women] would lead to temperance legislation” (cited in George, 2018: 175). 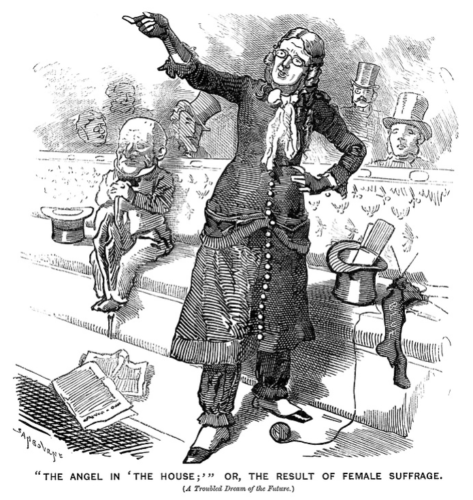 “The Angel in ‘The House;'” Or, the result of female suffrage. (A troubled dream of the future.) 1884, Punch Magazine.

Throughout the month of August, various amendments to the Bill were proposed. These included a restriction preventing women from voting in the House of Assembly (which was defeated), another restricting the franchise to women over twenty-five (also defeated), and another allowing women to vote by post if they lived more than three miles from a polling booth or were ‘ill’ on the day (also defeated). But the amendment proposed by Ebenezer Ward, which was passed, and which was one of the most significant political miscalculations of the period, was “to strike out Clause 4 barring women from being members of parliament” (George, 2018:178). 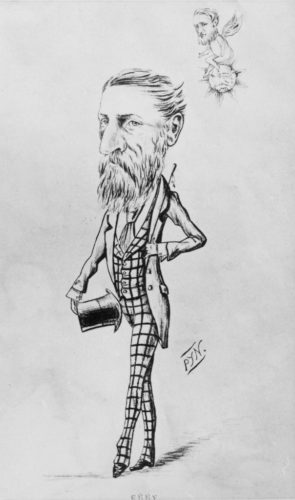 Ward’s proposal did not, of course, stem from his support of women’s suffrage. In fact, the opposite was the case: Ward assumed that the striking out of the clause would derail the Bill since no one in their right mind could possibly support the outrageous idea that women could be elected members of parliament. After all, not even the Women’s Suffrage League were calling for such a right! Ward’s attempt at subterfuge backfired spectacularly, and when, on the morning of 18 December 1894 the Adult Suffrage Bill was passed the women of South Australia not only gained the right to vote but also the right to stand for parliament, putting them at the forefront of the franchisement of women internationally.

I like to imagine that Ebenezer Ward, whom the South Australian Register described as “gifted with histrionic power . . . [and] curiously deficient in humour” (cited in George, 2018:94 [1]) spent the remaining twenty-three years of his life severely kicking himself for The Great Miscalculation that accorded him a place in history he may well not otherwise have achieved.

[1] George, Denise (2018) Mary Lee: The life and times of a ‘turbulent anarchist’ and her battle for women’s rights, Adelaide: Wakefield Press.

This blog post was researched and written by our Manager Nikki Sullivan. Contact Nikki by emailing nsullivan@history.sa.gov.au