Imagine campaigning for legislative change without a representative voice in parliament. Can you grasp the challenges?

During the campaign for women’s suffrage in South Australia women had no voice in parliament. The political rights afforded to men, and not to women, were what the Women’s Suffrage League and others were advocating for, and necessarily the ability to voice opinions in parliament proved difficult.

However, the movement persevered.

Edward Stirling, the first man to inject the dialogue of women’s suffrage into the South Australian Parliament, and later proposed a Bill in 1886 that failed, lost his seat in 1887. The Women’s Suffrage League had lost an important advocate for their cause.

They did not give up. The League worked to ensure they had parliamentarians on side. Kirsten Lees notes that a parliamentary advocate “had to be able to introduce bills, present their petitions, liaise with the establishment, organise meetings for the women with the premier and other government members, and keep the women informed of progress.”[i] .

After Stirling’s departure from Parliament, the obvious choice was Robert Caldwell who had kept the women’s suffrage flame burning by introducing a “votes for women bill” in 1887[ii]. Caldwell’s bill proposed an age restriction of 25 to women’s suffrage, which was not in keeping with the equality the Women’s Suffrage League was advocating for. Men in the colony, at this time, could vote at the age of 21.

Who was Robert Caldwell? 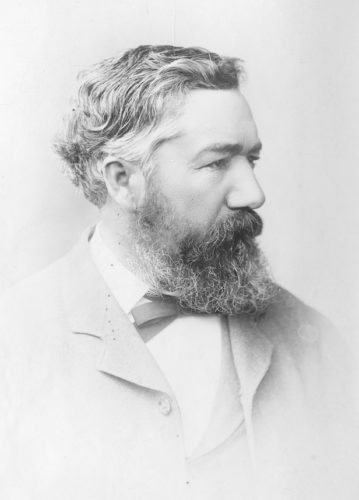 Caldwell was born in 1843 in Ayrshire, Scotland and as a young child immigrated to South Australia and took up residence with his parents in Alma Plains and later Mount Templeton in 1849[iii]. After leaving school he moved the Yorke Peninsula to undertake farming work. Later in his adult life he moved to Woodside in the Adelaide Hills, where he lived out his life.

Caldwell was elected to the South Australian House of Assembly as the member for Yorke Peninsula in 1879, later transferring to member for Onkaparinga in 1890 on account of his place of residence. He was a conservative politician, and his views eventually positioned him as out of touch with his constituents[iv].

He was however, a staunch advocate for Women’s Suffrage. Along with his 1887 bill he proposed two others in 1889 and 1890. While his conservative views led him to believe that only propertied women should have the right to vote he was considered a courageous champion for the cause by the Women’s Suffrage League.

While Caldwell only presented three unsuccessful bills to the South Australian Parliament, he was a supporter of the cause right until the end, and on 18 December 1894 was one of the 31 parliamentarians to support the final passing of the bill to enfranchise women in South Australia.

Histories of women’s citizenship cannot be understood in isolation, so what else was happening in South Australia at the time of women’s suffrage? Next month we will explore the history of the Working Women’s Trade Union, one of the key groups to advocate for the cause, among their many other advocacy platforms.