Last month we learned about the formation and role of the Women’s Suffrage League, but who were the key players?

This month we explore the lives of a few key individuals from the Women’s Suffrage League, specifically those who were part of the first executive committee – that is the President, Treasurer, and Secretary.

The first President of the League was Dr Edward Stirling, who we profiled early on in the blog series – find out more about Stirling here.

The League was established with co-secretaries Mary Lee and Hector McLennan, and Rose Birks was the first treasurer.

Mary Lee was born in Monaghan, Ireland in 1821 and married organist and vicar-choral of Armagh Cathedral George Lee in 1844. Together they had seven children. After George’s death in 1879 Lee immigrated to South Australia by way of the steamship ‘Orient’ on its maiden voyage with one of her daughters Evelyn (then 19 years old) to care for her son John who was already settled in the colony. John died the following year, but Lee who lived frugally could not afford to return to Ireland and so devoted her life’s work to ‘dear Adelaide’[i]. As a primary source of income she housed boarders in her home in North Adelaide. She also worked on the Female Refuge Committee, and in 1883 became foundation secretary of the ladies’ committee of the Social Purity Society whose primary aim at the time was to raise the age of consent. Their campaign was successful in 1885 when the age of consent raised from twelve to sixteen years[ii].

Lee’s commitment to women’s status led her to advocate for and join the campaign for women’s suffrage and her appointment as co-secretary came as no surprise. Lee advocated strongly and consistently for women’s status in society and in one letter she claimed:

“Could women have ever descended to such depths of misery and degradation if women had a voice in making the laws for women? Let us be up and doing. Let every woman who can influence an elector see that he seizes his vote as a sledgehammer and goes to the poll resolved to dash from its pedestal of authority this hoary injustice to womanhood…” (Letter to Women 14 April 1890)

In 1893 Lee was Vice President of the Working Women’s Trade Union, demonstrating her broad commitment to women’s status – not just the vote.

Charles Cameron Kingston who held the position of Premier during the Women’s Suffrage campaign honoured Lee publicly and in 1896 the government appointed her Official Visitor to the Lunatic Asylums, a position she held for twelve years[iii].

She died in her North Adelaide home in 1909. 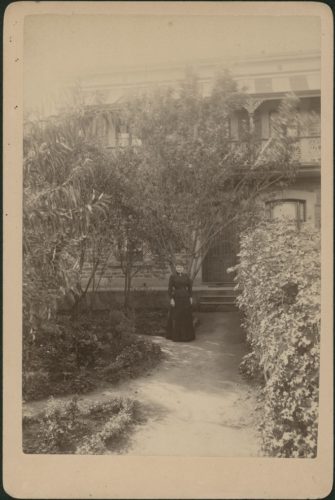 Mary Lee in front of her North Adelaide home, State Library of South Australia B70648

Hector McLennan was born in Glasgow and immigrated to South Australia.

McLennan was well known in Adelaide and Melbourne and was associated and worked for Howard Smith Limited, a shipping company that later diversified its functions to coal mining, steel production, stevedoring, travel, railway rolling stock building, sugar production and retail. He was appointed Director of the company in Adelaide and later Manager in Melbourne. Later in his life he opened a Melbourne branch of James and Alexander Brown coal mining business.

Little is written about McLennan’s contribution to the women’s suffrage movement, but he is recorded in the local papers as contributing to the debates.

Rose Birks became the first treasurer of the Women’s Suffrage Leave when it formed in 1888. Her obituary, years later in 1911, claimed that she was “one of the most active workers in South Australia in the interests of young women.”[iv].

In an interview with the Toronto Daily Star in 1906, many years after Women’s Suffrage was achieved, Birks was recorded saying:

“It may not have accomplished all we hoped for it … but it has taught women to think. At first they voted just as their husbands did, but now they use their own commonsense.”[v]

Birks’ obituary fleetingly mentions her role in the Women’s Suffrage movement, and promptly recognises her contribution to the Young Women’s Christian Association (YWCA), of which there had only been three presidents since its establishment in 1879 at the time of Briks’ death. She was the third and held that position for nine years. Her obituary notes that “her administration was characterised by remarkable wisdom and forethought”[vi]. Birks’ commitment to women, like many other suffragists, extended beyond the vote. 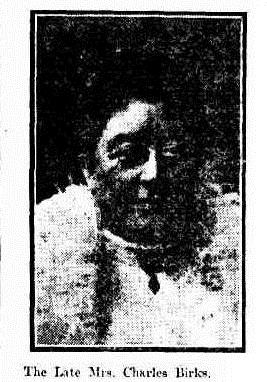 There were of course many others who participated in the League, and there is much research to be undertaken to uncover the stories of lesser known suffragists.

Next month we will discover more about another key organisation in the fight for women’s suffrage, the Working Women’s Trade Union.