When resistance occurs citizens in a democracy organise to effect change.

When Dr Edward Stirling  advocated the extension of the franchise to women, the House of Assembly passed his motion affirming the desirability of recognising women’s political rights; but when the Bill was introduced to give effect to the motion, the House quietly blocked it.[i] 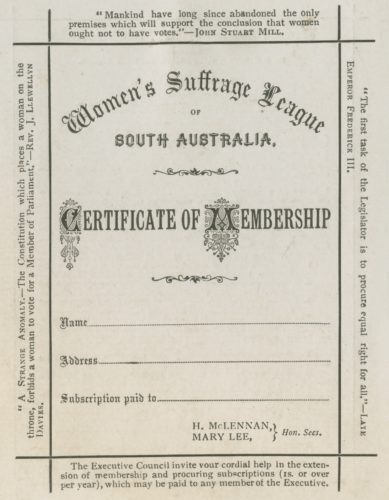 This was one of the reasons behind the formation of the Women’s Suffrage League in South Australia. While the Bill proposed by Edward Stirling’s was knocked back, he and many others has laid the groundwork for public debate.[ii]

At a meeting of the Ladies Social Purity Society on 6 June 1888 Mary Lee, an active and prolific Suffragist and Secretary of Society proclaimed three resolutions:

Mary Lee became Secretary of the Women’s Suffrage League upon its formation.

At a meeting held at the Adelaide YMCA rooms on Friday 20 July 1888 about 80 women, members of the South Australian Parliament, several religious leaders and many others attended what was the first meeting of the Women’s Suffrage League. Dr Edward Stirling, the same man who first proposed women’s enfranchisement to the South Australian Parliament was appointed ‘chairman’. It was reported in the Evening Journal that

On behalf of the ladies the Rev. J. C. KIRBY moved

Over 60 percent of those who attended the July 13 meeting were women[v] and “the movement largely emanated from ladies of Adelaide.”[vi]. The core aims decided on at this meeting, and subsequently the Women’s Suffrage League’s Constitution became as follows:

Who was involved? Dr Edward Stirling was the League’s first President; Mary Lee and Hector McLennan were co-secretaries, and Rose Birks was treasurer. The makeup of the executive promoted the fact that the Women’s Suffrage League was “a tightly run, well-organized body of both women and men.”[vii]

The League worked for six and a half years under their explicit constitution to influence the public and Parliament. As the campaign evolved crucial support came from the Woman’s Christian Temperance Union and the Working Women’s Trade Union. Respective presidents Elizabeth Webb Nicholls and Augusta Zadow were both extremely influential.[viii]

In 1891 the League got its first female President, Lady Colton, who succeeded Edward Stirling. Colton was “experienced in management and had a sound knowledge of the colony’s politics.”[ix]. 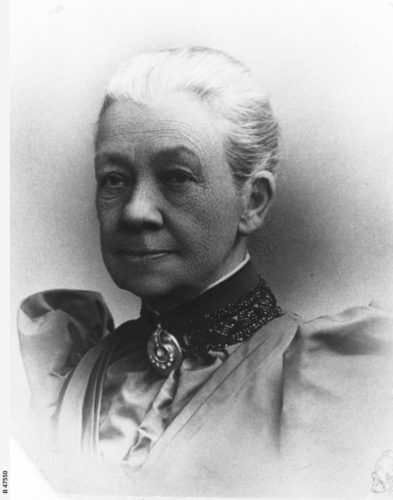 The Women’s Suffrage League and their many supports were responsible for the massive petition presented to South Australia’s Parliament in 1894, which secured support from the Parliament in the journey to equal suffrage. We will learn more about this petition later in the year.

Next month we will discover more about a few key members of the Women’s Suffrage League.