A movement cannot happen without people, and people unite in groups to achieve big gains. This goes for women’s suffrage in South Australia too. Many groups supported the cause for equal voting rights between men and women.

Before the Women’s Suffrage League (which we will learn more about next month) formed in South Australia, the Woman’s Christian Temperance Union of South Australia (WCTUSA) was established in 1886[i]. The formation of the group was influenced by the visit of Mary Clement Leavitt, an American World Missionary of the international Woman’s Christian Temperance Union (WCTU) who was “received with prolonged cheers”[ii]. The first branch began in Ohio, USA in 1873, and within two years was setting up branches internationally, including in Australia by the early 1880s[iii].

The first meeting of the Woman’s Christian Temperance Union of SA was held at the YMCA in Adelaide on Monday 30 August 1886[iv]. 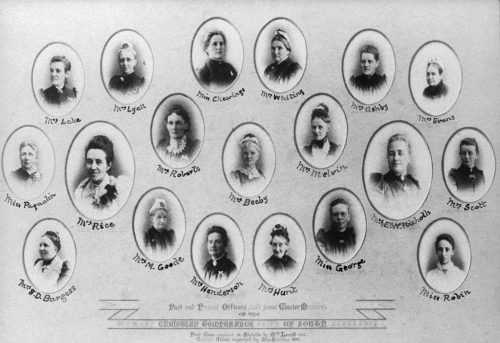 State Library of South Australia B56710

But what exactly was the mission of the South Australian group?

The members believed in a ‘Woman’s Mission’[v] which, at the time, meant making society “more moral”[vi]. Morality was, and is, dictated by the normative values of society at the time. Combatting alcoholism was the group’s first objective because it often led to violence, including sexual violence, against women and children[vii]. Its primary purpose was to promote temperance and Christianity throughout South Australia in order to “improve people’s lives” while advocating for issues that effected mainly women and children including raising the age of marriage consent for girls and women’s suffrage[viii].

By 1889 membership had grown to more than 1100, organised in 23 local unions across city and country areas. Also by this time the Union had 39 departments, including among them Aborigines (language of the day), factories, legislation and petitions, narcotics, peace and arbitration, prison work, pure literature and art, suffrage, unfermented wine and work among barmaids.

A key player among the Woman’s Christian Temperance Union was Elizabeth Webb Nicholls, who was a founding member of the Adelaide branch[ix]. She became the SA President in 1889[x]. From 1894 to 1903 she was the Australasian President and resigned as SA Branch President in 1897, but was re-elected in 1906[xi]. Being an international organisation Nicholls’ attended conferences in Paris, London and Edinburgh and in 1920 she was delegate of the tenth world convention of the International Woman Suffrage Alliance at Geneva[xii]. 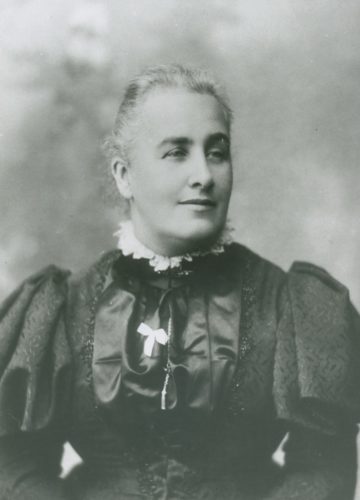 State Library of South Australia, B 58002

She was a Councillor of the Women’s Suffrage League and through her ongoing connection and position within the WCTU helped to gather 8268 of the 11,600 signatures that made up the suffrage petition presented to the South Australian parliament in 1894[xiii] (which we will learn more about later in the year).

The Woman’s Christian Temperance Union was a key group in the success of the Women’s Suffrage movement in South Australia, and only through the connections among groups could the suffrage petition have been signed by so many people from metro and regional areas of the colony.

Next month we will learn more about the Women’s Suffrage League and their contribution to the 1894 Constitutional reform.